An intense week overseas with Scheherazade

Artists around the globe are paying obeisance through tributes, treatises, exhibits and reconstructions as 2009 marks the centenary of Diaghilev’s Ballets Russes. Artistic Director Jean-Christophe Maillot of Les Ballets de Monte Carlo has created the Monaco Dance Forum Festival’s Centennial Celebration of the Ballets Russes, an homage to the original Ballets Russes by engineering an ambitious, three-phase, 12-month festival that involves collaborations with artists in dance, film, theater and writing. 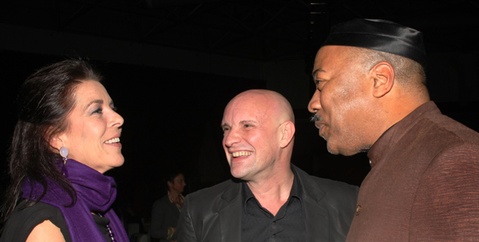 LINES Ballet is invited to participate in all three phases. The first part occurred last week when we inaugurated the festival with a commissioned premiere of Scheherazade to packed audiences in Monaco’s vast Grimaldi Forum. An armada of artists has been steadily working on this production for nine months, with visual production directed by Robert Rosenwasser and a score created by tabla master Zakir Hussain.

Maillot came to see LINES Ballet last year while we were performing at France’s Montpellier Festival. When he extended the invitation, Maillot decided that we would both engage in a choreographic conversation about Rimsky-Korsakov’s magnificent score.

Maillot is also constructing his own interpretation of Scheherazade that will premiere in Monaco Dec. 26. When I accepted the commission my choreographic focus was not the details of the Arabian Nights narrative, but the symbolic meaning of Scheherazade. The folk memory is a sacred art in which the wisdom of a time gone by is preserved for future generations. What has been preserved in great literature, folklore and fairy tales are esoteric doctrines.

Abstractions are symbols and referents for something that words are powerless to describe. These take time to intuit, because intellect alone doesn’t suffice. In dance, there is also meaning over and above what would be thought of as just dancing. When you mention “Scheherazade,” people often conjure an eroticized “orientalism” with a Cecil B. DeMille cast of thousands, including eunuchs, harems and decapitations. Very little is known, or even spoken of, regarding Scheherazade herself. My main interest was Scheherazade as woman and symbol. Research informed me about the long-held abuse and oppression that occurs to this day of women and girls across the globe. It was mind-boggling.

March 2010 marks the second phase of this international festival. Ten artistic directors will convene in Monaco to work with 85 dancers brought from schools around the globe. After participating in workshops, classes and performances, each director is invited to choose a dancer to apprentice with their home company for a full year.

In the event we all want the same people, the students will make the choice. In July, I return to Monaco for the third phase of the festival, where I will premiere a collaboration with 2009 National Book Award winner Colum McCann, author of “Let the Great World Spin.” Reflecting the collaborative effort of Jean Cocteau, Maillot has engaged the production to be built on his own 50-member company.